Hikarishi awoke early he got showered scrubbing him self to remove any smell he might have. He sat down and ate a bowl ceral for breakfast, after he finished he got dressed in a simple blue T-Shirt and black pants. He tied his kunai holder to his right leg and put his three kunai in it, and strapped on his Heveans sorrow ninjato on his side strapped and inserted correctly. He went out side and locked his door and headed to the training grounds to meet Kino, he packed a lunch and some water incase they got hungry.

Hikarishi arrived at the training feilds after a few minutes walk and sat down the lunch and water in a safe spot so that it would not get harmed. 'Now to wait for Kino he thought looking around and taking note of the surroundings, there where plenty of trees and some rocks that could be used if he needed them, he saw nothing out of the ordinary but didnt drop his guard.

Kino sighed, he had just recently gotten dressed, and headed outside of his home after a nice, well balanced breakfast consisting of a bowl of cereal and a slice of an orange. He was walking the dirt paths of Konohagakure, sighing. He was still tired, he hadn't assigned anything for his genin squad, though he assigned training for his unofficial student, an Uchiha like Kino, basically a member of his family, perhaps a cousin, it was possible Kino was his uncle, or the other way around, though Kino would never find out, nor did he want to.

He walked through the village in his dark clothing, a simple sleeveless black shirt. He also wore black pants, holding quite a few pockets, being held up by a belt. The belt's main purpose wasn't just holding up his pants, but carrying a pouch. The pouch was capable of holding many small projectile weapons, such as Kunai, which he had two of stored safely in the black pouch, sealed by a zipper. It could also hold Shuriken, and Senbon, as well as something that wasn't a mainly throw able weapon, paper bombs. Sure it can be attached to a thrown Shuriken or Kunai, but Kino didn't think that counted.

He sighed, moving on, deciding on a quicker route. He performed hand seals, and using the body flicker technique to get to his destination in nearly an instant. "Sup" He said, halfassedly. He was still tired. He stood about five meters from the boy. Kino activated his sharingan. "You wanted to get started on the creation of a jutsu, correct?" He asked, wondering what he wanted to train on. "Or would you prefer mastering the sharingan's tracking capabilities?" He then asked, there were two options for the boy, though he could always suggest more. "By the way, did you ever tell me your name..?" He said, yawning.

"My name is Hikarishi Uchiha." The young boy said prefering to answer that question first before going on to the next one, which was a choice between making a jutsu or learning how to use his Sharigan, "And if you did not mind i wold like to work on the tracking skill with my sharigan." He finished activating his sharigan noticing nothing different untill he looked at Kinos' eyes and saw chakra flowing through them that signaled the sign of a dojutsu being used. 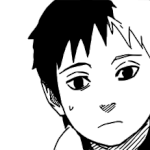 He looked at the boy. "Ah, thank you." He said, somewhat recalling the name, though he could be confusing him with another. He stared at the boy as he mentioned wanting to learn how to be able to track with the sharingan. "Well, from what I know from experience, you can only track up to certain levels of speed, I'm sure it's dependent on your own level of speed though. SO, we just keep training your ass by using me and a few shadow clones as your targets, when you're capable of seeing us moving, you pass, keep in mind that we'll be moving at our top speed, which I doubt you could track, let alone keep up with." He said. He was attempting to be mean, he was just staying the cold truth, the facts. He jumped back a short distance, and performed a short series of hand signs, the same series three times. The first time a clone appeared, this was continued on until there were two more. He sighed, then looked at the boy. "Begin," He said, finishing a new series of hand signs along with his clones, the body flicker. "By" he said, passing by once not letting his speed fail "The" a clone said, helping Kino complete this the speech, "Way," another one said, the last one ran in a circle, unable to be tracked by the boy despite the fact he was right infront of him. "We'll be running all the way around the forest, you'll have to hunt us down." it said, running off with the rest of the Kino's into the forest.

Hikarishi watched as Kino performed a set of hand seals and then another one in which two other Kinos appeared, noticed that he could make out most of the hand seals that where performed then two of them just blasted off while one stayed running circles around him telling him that they would be running around the entire forest and it was his mission to find them. Even with his Sharigan activated he was unable to follow any of them, not even the one running right in front of him, None of the Kinos' were visable any more and if not for the leaves that moved, which one might think was just the wind but Hikarishi knew better as even though the sun was bright and there were clouds the wind was not blowing hard enough to move the leaves this close to him, he would have had no idea where the man had gone to.

Hikarishi took just a second to look at the sky, it was a beautiful blue tinted purple in some parts with fluffy white clouds though it had ended up raining last night it was not near enough to change the terrain enough to let a skilled shinobi leave behind foot prints not to metion it was already dry again today, Then he took off after Kino with his 'new' eyes he could see things faster then before and more clearly. Just after entering the forest he saw broken twigs leading to the right and followed, taking the turns where necessary, hoping he was taking the right path, Hikarishi drew a kunai so he could try to pin down any of the kinos' that he found he would not aim for a kill shot for fear of hitting the real kino, which he did not want to do.

Kino simply continued out into the forest, he had now slowed down due to the amount of time body flicker could be activated for, he had already reached that time limit. He had to wait a while before being capable of using the technique again. Kino had traveled through the branches of the trees, the original one did, the clone were on the ground leaving a trail of broken twigs for the boy. The original Kino smiled, and continued on, growing farther away.


Meanwhile, the boy had launched a Kunai at the clone, one of them had grabbed the Kunai, and stared at the boy. The other clones spread out, staying within close distance of each other and the boy, leading him to hopefully stay in the area while Kino takes a nice long nap.

Hikarishi saw two of the kinos' and threw his kunai hoping to hit his shirt and stick him to a tree, but it was caught however he was able to see kino as he was turning and began to understand the combat ability of the sharigan. Hikarishi reached down and grabbed two more of his kunai holding on to them, he drew them so that he would be able to defend him self if needed this time. The two kinos' that he saw where on the ground leaving a trail of sorts, the last kino was no where to be seen at the time, which lead him to believe that these two where the clones and the real one was ahead of them.

Hikarshi had never dealt with shadow clones before so he did not know the range at which some one could be and them not disappear. He threw a kunai just in front of one of the kinos', that he deduced was a clone, if the clone did not stop then it would be hit with the kunai. He prepared his other kunai in case the clone thought of throwing back the first one.

As the clone grabbed the Kunai, Kino decided he was bored, and too tired to do training. The clone would travel back to the boy following the trail left behind. "We're done for now, sorry, I have places to be I forgot about." He said, poofing away, dropping the boy's Kunai on the ground. Kino continued on towards Konohagakure, not bothering to go meet with the boy, he was sure he knew his way back. He dashed home at top speed, looking forward to continue in his slumbers.

Hikarishi heard the Clone talk and found that he was right about it, he picked up his kunai and stored them, he hoped everything was alright with Kino. "Ok ill meet you later, maybe." he said before it poofed out hoping the Real kino could hear him.