It was early in the morning as Nakara was already awake in his room getting dressed and ready for a long day of training, he decided to head to the training grounds earlier than usual to get there early and to also get a little running in beforehand. Before he left he would pull a scroll from under his bed, the summoning scroll that belonged to his family. Opening it slowly he would look for an empty spot for him to sign as he pricked his finger with his Kunai from his sleeve, signing his name on it and sealing it. Now he had his own summon, but the day was far from over. Now he would put the scroll back where he got it from, walking outside and running to the training grounds. His black Kosada would flow in the wind as he began to run, although he took to the rooftops to get there faster he would still have a long way to go before he arrived to the training fields. Jumping off a nearby rooftop and landing on the ground, Nakara would continue to run to the training grounds as he was almost a couple of feet from it. Sliding to a stop he would finally arrive there and look around,"Seems like no one is here yet good," as he began to punch and kick at a nearby post. The post would shake and move as he continued to kick it, throwing crescent kicks and hook kicks where a persons side and sternum would be. Although these were only training moves, Nakara was already getting pumped up. 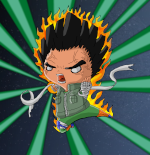 Sadao was walking to the training grounds, with all his gear on him. The reflection of his buster sword shined of the pure metal it was made of, and casted a shadow on the floor. He was walking until he saw a fellow genin of the leaf hard at work training. Sadao walked towards the boy, and watched him punch a post constantly. When Sadao entered the training area he was in he stopped walking. His sandals kicked up the dirt from the ground making a puff of dust arise from the ground. " So, hows it going?" Sadao said with a small grin on his face. He looked at the young leaf shinobi waiting for a response.
[TWC: 117]

Nakara was hard at work punching and kicking the goal post, making each strike move the dummy more and more. He could imagine his hits striking an actual person, breaking ribs and bones as each strike went to a different direction. His mind was filled with ideas as he heard a voice coming from behind him," So, hows it going?"," as his last kick hit the post and he turned around and smiled,"It is going fine..i did not expect another leaf shinobi to be up here ," jumping onto the post as he looked down onto the boy. He barely looked any older than him but looks could be deceiving as he squatted on the post, keeping perfect balance,"Are you here for some training as well or are you merely here for a challenge, either one i can provide," giving a small chuckle as he waited for the boys answer.

Just stumbling into the training grounds, training was something he needed and by jingo, was he going to get it. However, as soon as he walked in he noticed one boy crouching on a post as if he was a cat and one holding a buster sword. His eyes scanned the two and looked between them.. Is this what life in Konohagakure No Sato was like? For a second Hisao thought about trying to calm the two down, but judging by how no blood had been shed yet, he thought he'd give it a chance to see if there was actually any 'bad blood' between the two people here. Walking towards them, he held his hand outwards with his thumb posed upwards, grinning as he spoke, "Hey there, guys, what's going on?"

" I'm hear to do some training, and I see you are accepting this spar so lets start this thing!" A voice came from the back of Sadao, "Hey there, guys, what's going on?" Sadao then turned, and saw a small boy with a smile on his face. " What do you wan't, you just interrupted our conversation." Sadao looked back at Nakara, and ignored the boys presence. Sadao's eyes were staring right into Nakara's, Sadao's eyes glistened while looking at Nakara. "Well then, sorry for the small interruption, lets fight!"
[TWC 89, Xyxer for you to be in the training you must have acceptance by nakara, this is open to leaf GENIN]

[i accepted him in the CB so he is okay]

Nakara would look at the both of the boys and smile," it is okay i can take you both on..it does not matter how many people come i will take them all on without a problem," jumping from the post to a nearby tree," now when you two get through having that petty squabble let me know so we can begin," chuckling for a moment he would see that they were actually done. He would disappear from the tree, between the two boys, throwing a back handed punch towards Xyxer, sending him back only a couple of meters and throwing a crescent kick straight to Sadao's side sending him three meters back. Each attack would move at a speed of 39, almost twice as fast than the boys could predict, but this was only the beginning as he jumped back onto a post and smile," so what are you two going to do now, besides lay on your asses," of course Nakara was trying to get them pumped up. Nakara would not do anything deadly or serious until the two of them got into it...or more people had shown up, either way he was determined to have fun and learn something.

" That hurt!" Sadao said as he was rubbing his butt. Sadao jumped to his feet standing balanced. " Why must you always be so mean?" Sadao said under his breath. Sadao jumped into the center of the training area where he could see, and hear everything. Sadao clenched his fists, and started to send chakra into his clenched fists ready for someones next move. He looked around the area, he saw Nakara on a training post. Sadao rammed his fist right into the post breaking it with one punch, making it fall to the ground. Sadao blew the dust off his fist, and kept his guard up while looking at the other boy on the ground stil sitting on his butt. " Well you gonna do something little kid?" Sadao told the boy. Sadao then looked away from him, and waited for someone to make their next move.
[TWC 146]

The first thing that Hisao thought was that one of these people was a complete bellend. The other was that because the boy was such a snob, it could mean that he held some sort of power. After all, the weak can't really brag about it, can they? Therefore, Hisao was standing on his toes when the other boy had disappeared, the one whom appeared to be okay. Immediately, Hisao would start to fall backwards from pure shock, this was aided by the fact that Hisao was still walking when he began to fall, therefore his footwork was previously uneven giving him no time to get back to standing. Thankfully, as it turned out his misfortune was working as his luck as a fist traveled just about his head, centimetres from his nose. Landing roughly on his backside, he rubbed his arm a little, having landed a little roughly on it. The heck? Perhaps he shouldn't have joined the fight already, perhaps it was better to let the two fight it off. None the less, Hisao wanted to see the power of the other boy so he rolled backwards and stood back up, looking at the one whom he had only began to hate, Sadao. He waited anxiously to see what devastating surprises this boy must have under his sleeves to hold such an attitude.