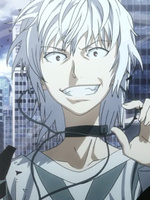 As Mitsuaki
get's ready to go to school, he feels as if he's been skipping out on
his training. He realizes that since he has always been in the classroom
that he has lost a lot of hours that could be used to train. He thinks
how he wont be able to become a great ninja if he is slow and weak. So
he decides to "take a break" from school that day and train his speed.
As he finishes his breakfast and says good bye to his mother and father,
he runs in the direction of the school. When he is out of sight he goes
around the long way running fast to make additional training on his
speed. As he gets to the training field he thinks of how he could of
been at school studying bored,while he is out here having fun. He smiles
as he dashes to the field. As he gets there he sees a deserted field
and thinks how happy he is to have it all to himself. As he makes a huge
smile on his face he thinks of how boring it is to just run around. So
he makes a game out of his training. He decides to time himself while
jumping across some logs on the ground then circle around the whole
field 3 times in 1 minute and 30 seconds. As he gets out a stopwatch and
puts it around his neck he gets into he's running position. He then
presses the button to start the watch while shooting out running as fast
as he can around his track. As he finishes he gets tired and takes a
deep breath. When he pressed the stopwatch to make it stop he felt
ashamed at how slow he has gotten and didn't even want to see it, but
forced himself too. 3 minutes and 45 seconds! He thought how slow he has
gotten. He thought how could he become a great ninja with such a bad
time? Then he remembered why it's called training, to perfect what your
bad at. So he did it once again being determined to succeed, only to
slip and fall on one of the logs not paying attention. He gets back up
and runs fast just to get 5 minutes and 13 seconds. He started to get
really mad ashamed of his time. He then got ready and dashed ahead
determined to break his time. This time he gets 2 minutes flat. Not
bad, but he can do better. He goes 5 more times until he gets 1 minute
and 32 seconds. So close!!! But not enough, as he gets ready again
determined thinking how he first got 3 minutes and 45 seconds and now
only 2 seconds off. He smiles ready to burst, until he hears a voice. As
he turns being frightened he is terrified seeing his teacher frowning
at him. Mitsuaki asked "What are you doing here teacher?" He then replies saying how Mitsuaki has ditched school just to train. Mitsuaki
says "It wasn't ditching teacher, it was just taking a break. Don't
need to be mad!" The teacher then replies that he is in big trouble. But
before the teacher could finish Mitsuaki dashes away into the village. As Mitsuaki runs away not thinking he realizes how his teacher is a chuunin and is probably far more faster then him. Mitsuaki say's"I'm in so much trouble. But lets put my speed to the test." He dashes all around the village avoiding his teacher. Then Mitsuaki's
stomach growls. He realizes he has been dashing for hours and was
having too much fun with his new speed to pay attention to the time.
"Man I can go for some ramen right now. I'm sure teacher gave up because
of how fast I am. I'm such a boss!" As Mitusaki goes to the ramen shop.
He sees his teacher."Oh no he must have known I would come here." Mitsuaki
tries running away but then someone grabs him on his shoulder. It is
his teacher! "Man you are fast. I had to give up, but I knew you would
come here." said his teacher. Mitsuaki asked him if he can buy food for getting new speed. His teacher said sure. As he bought food Mitsuaki was scolded on ditching and told not to do it again, or else he would have to suspend him. Mitsuaki said ok, knowing if he said other he wouldn't get any food. After food they said good bye and see you tomorrow. But Mitsuaki wasn't satisfied. He wanted to get his time before he was rudely interrupted. Mitsuaki
went to the training field. He got in position and shot off. He felt
how familiar this track was and felt like he was running faster then
before. As he got to the end he pressed the button to stop it, and
looked. He couldnt believe hes eyes. 48 seconds! Mitsuaki
was so happy he ran home faster then ever. He got home and showed his
mom and dad his time and new speed and told them about the track. They
were very happy for him. But he wasn't going to tell the part about him
ditching. My parents asked how was school and I replied Ok.

As Mitsuaki wakes up in the morning, he feels thinks how he would need to get his chakra up if he wants to become a genin. "Hey dad, I want to increase my chakra but I don't know how to, do you know who can help?" His dad replies" Well, why don't you ask your grandfather. He did help you train for before enrolling into the academy."Oh yeah your right, thanks dad, well Im off to go to his place. Bye!" As Mitsuaki runs out quickly his parents didn't even get a chance to tell him good bye. As He nears his grandfather's place he remembers all the hard training, that made him so soar each day, but helped him too. When he goes into his grandfather's house he thinks of all the training he is going to have to go through, but that would help him."Hey grandad!" His grandad then turns around to face him"Oh hello Mitsuaki. Wow, you have grown alot, how long has it been?" "Its been long enough grandfather, but I need your help with training." "OK. What do you need help with?" "I need to get my chakra up, do you think you can help me?" "Sure come meet me at the training grounds in 10 minutes." As Mitsuaki goes to the training grounds ten minutes later he sees his grandfather. "Hey grandad what are we doing today?" "Mitsuaki tell me something, do you remember before you were in the academy and are training together?" "Well, I only remember a little of it. Not much really," "Well that explains why you want my help. Mitsuaki you should now you have trained your chakra before, it is just locked in your mind somewhere probably. I want you to meditate and try to remember your past OK?" Mitsuaki then nods. As he gets into the meditating stance his grandfather says "Remember everything before the academy, but around the time your mother got sick." Mitsuaki nods again, and starts thinking about that time. He starts remembering his past during the time his mother got sick. -Past- "Dad is mom going to be ok?" "Sure she is son, but I have to go check on her. Sorry, ask your grandfather to help you in chakra training. Tell him I sent you." As Mitsuaki runs to his grandfather he explains what his father asked."Sure grandson, come walk with me to the training grounds." As they walk his grandfather says "Today Mitsuaki, we are going to walk on trees." "But how grandfather?" "Well you are training your chakra by focusing it to a specific place which are your feet. You then control and balance it while walking up a tree. When you feel like your about to fall, use your kunai to mark where you were at with the tree. Got it?" "Sure grandad. Ill try it." As they get there his grandfather demonstrates the training. "Do you see how it works Mitsuaki?" "Yes grandfather I do, Ill try it." As Mitsuaki goes up, he keeps falling down. "No Mitsuaki you have to concentrate." As Mitsuaki stops and concentrates his feet starts to turn blue. "Good Mitsuaki now your doing it." As Mitsuaki goes up he starts to lose concentration "No Mitsuaki you must concentrate don't be scared." Mitsuaki's chakra goes back to normal. Mitsuaki then starts going up the tree faster then stops almost to the top and falls down. "Good job Mitsuaki, try it again." Mitsuaki goes up again and keeps falling but dosent quick. He concentrates and goes up and finally makes it to the top. "Good Mitsuaki do it again." Mitsuaki keeps going up to the top and coming down for hours. "This is so fun grandfather." Mitsuaki says. Grandfather answers "OK I think it is time to go. Lets go check on your mother." "Ok! Here I come." -Modern Time- "I remembered grandfather! I know I can do it." As Mitsuaki goes up the tree and climbs to the top, he sees all the marks from his childhood on the tree. "Yes Mitsuaki, I know what you are going to say. Those are your marks. It is time to go though. You took a while when meditating." "Come on Grandad we need to train some more....Lets race!" The grandfather then smiled"You race me! Ha, you know your talking to one of the best Kinzokutei ninjas right?! I was a fast man and had a lot of chakra." Mitsuaki then says "Yeah you was! Now your slower aren't you? Come on grandfather, I got faster too, Im not as slow as before." "Ok one race, whoever can go up the trees the most times wins. In 1 minute." "Ok bring it!" As they both get ready his grandfather says go and they speed off. As the seconds past they kept going up and down. When the minute past, they both stopped. "I guess that is a tie. Lets go home Mitsuaki." "Ok grandfather, next time though." So they both walk home together, joking around.

Approved for 4 stats and 8 jp