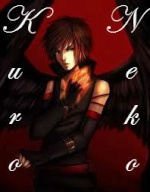 Kuro woke up somewhat early and ate some breakfast. about an hour later he decided he would do some stamina, and strength training, so he got dressed and went outside. he started going off to the village trainging grounds in sunagakure. kuro went out to the training grounds and looked around to see if anyone was on the area training aswell do maybe he could have a partner to help him train. kuro didnt see anyone so he decided to unpack his supplies and start training. He took out some weights that where about 50 lbs and he had four of them. Kuro strapped one of the weights to his left arm, anotuher to his right. Kuro teid one of them to his left ankle and then to his right. Kuro then took a knife out of his pack and put it in a sheath on his pants. Kuro stood up and picked his arms up and crosses them. Kuro slowly walked up to a tree and looked up at it. The tree had alot of branches so that he did not have to channel his chakra to his feet to walk up the tree unstead he would pull himself up with his strenght alone. Kuro reaches up for one fo the branches and pulls himself onto the tree. Kuro supports himself with his feet and starts running up the tree pulling himself up along the tree. He got about half way to the top fo the tree he rested on a branch as he was breathing heavily and was sweating. Kuro took only a 5 minute break and started back up the tree the 200 lbs attached to his body started weighing him down as he started getting more and more tired. But kuro was determined to get to the top, he finally got to the top and he was just about completely worn out he was breathing quite heavily and was sweating alot. He took some water from his pouch and drank it, then with his knife he marked the top of the tree to tell that he has been there. when he was up at the top he looked down at the training grounds and smirked thinking "i can do better than this" and he looked for a tree but one taller than the one he has climbed already, and he spotted one. Kuro smirked again and started coming down from the tree. Kuro jumped fromt he top branch and landed on a smaller one breaking it from the force of the weights and continued falling down... Kuro was fallen half way down the tree before he slammed into the branch that he was resting on before he muttered "dammit!" and lied on the branch thinking of a way he could get down the other branches with out breaking them with the weights. Kuro got an idea and slwoly stood up on the branch. Kuro put his body and hands on the tree and channeled his chakra to his hands and feet. and he slowly made his way to the bottom of the tree, he walked over to his sack with his supplies and sat down panting.

the word count is in the discription... but it is 527 words

Please post all word counts at the bottom of your post, description is only visible when your scrolling through the list of topics, thus when you actually open the topic it is not listed.