Namakemono was finally alone by himself, and he took this moment of Nirvana to train solo. He had word of him needing to be in charge of a team, so he didn't want to be in a depressing state. Though Jounin are suppose to be responsible for such kids, Namakemono was chosen for the occasion. Maybe they saw something in him that he didn't? Either way, he agreed he should gain some more physical strength before training the children. It was simple to start off with some basic physical exercise to gain agility. Agility was probably the number one most important stat to train as a Shinobi or Kunoichi. It allowed them to be quick on their feet and dodge incoming attacks. Namakemono passed Agility scores with an average rating, something that should be astounding for his rank. He felt disgrace for being a slow Shinobi.

The area he stepped forth into was a regular grass land. The floor blanketed in soft fern and it the floor itself curved upwards, ending in a steep dive. Off in the distance there was the entire village hidden in the leaves. It was a lovely sight, but he had more on his mind. Namakemono donned his regular attire which consisted of blue sandals on his feet which were commonly worn. His legs he wore a pair of loosely fitted black pants with a holster strapped to his right thigh. Around his waist was nothing special but the hip pouch suspended around to his rear. He wore a mesh shirt under thee long sleeved black shirt, in which that was under the Flak jacket of Konoha. On each shoulder he bared a metal plate with the Konoha symbol on each one. At last, he wore a pair of fingerless gloves with metal plates on the back of each hand and the forehead protector, in a slanted fashion turned to the side.

Scanning the area with a confident, but curious look, moving his crimson eyes to ensure the area was safe and free, he fully invited himself into the training ground. It was time to ready himself for physical conditioning, working on sudden sprints and cardio overall. Spreading his legs wider than his shoulders and getting his hands ready in a seemingly combat stance, he leaned forwards with his arms back in a typical Shinobi sprint. Shredding across the dirt, the man's goal was to reach the edge of the cliff from his starting position. The cool air blasted across his face making his way toward the edge at a rather fast pace. He arrived to the end in a matter of second, but that wasn't the end of his activity. Quickly dragging his feet across the grass, he countered his direction and ran the opposite way, making his way back to his starting position. This one was down hill, giving him a bit of slack on this turn.

He kept the same style of sprinting, making his way down the grass land. He arrived the same time as he took off to his starting position. It was time for another sprint, trying to keep the same pace at all time. Working on muscle explosion, he ran back up with slant with incredible speed. He clacked his sandals as he made his way all the way up, then back down once again completing another cycle. Working hard, he completed a series of ten full completions before his speed started to slowly diminish. This also worked his cardio as a side stat to sprints. His main focus though was sheer speed, which determined safety and defense. It wasn't just sprints that determined speed, so after he finished this last let, he stopped the activity. His feet dragged across the grass, kicking up dirt in the process.

Suddenly stopping in his tracks, he was sweating, but a minor amount for what he was doing. He had a better exercise for speed, working on quick steps to ensure take off speed and accuracy. Chopping his feet in place, he went over one meter to the left, then quickly stopped and started to head to the right. However he stopped briefly at the center before making his way to the right. The short speed burst worked on toning his leg muscles which allowed the entire speed concept to work. He kept up the good pace as he started to sweat for frequently. It was best to work in gear so he can get fully use to it. He chopped his steps back and forward, weaving through the imaginary net for his physical training. He worked up a well sweat and was nearly ready to finish the session. He started a cool down exercise to easy his muscle into a slow relaxation.

Now that things were finally settling with his practice, he gave out a sigh. With his steps slowing down, things become more easy to manage, as he finally finished the exercise. Stopping, out of breath and exhausted from his personal training, he turned around looking at the long path it took for him to reach the training ground. He placed both hands on his hips before deeply inhaling and wiped a beat of sweat from his cheek. His training seemed over, but in Namakemono's mind, he wasn't quite done yet. Checking his feet in the correct position, he kicked off his back leg and began his journey down the path way which lead to the village gates. The speed he darted from was rather impressive, making his way into the village grounds. From his first day of training as a Chuunin, it went well, now taking responsibility on his own, he slowed down into a jog, back in his village.

Inside the boundaries of his home, his mind left the action zone and resumed the charismatic man people knew him as. He casually placed both hands in their pockets and started to walk his way to his apartment complex where he would rest and prepare for his student training activity. 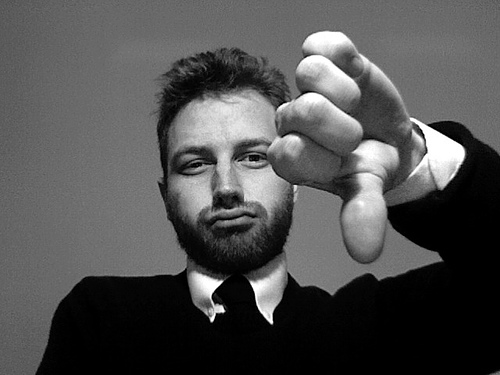 Upon arriving back to the training ground, he wore the same outfit as before. Keeping his hands in the pockets of his pants, he slowly plotted up the hill. I think I over worked myself yesterday... Letting out a deep sigh, closing his eyes and letting his head rest back as he had another date with duty. Arcing his back, popping the bone in his back and twisting his neck, he tried to shake off his wariness and focus on training. Back to the same grassy plain, he stopped to organize his plan and figure out what he was going to have planned.

"I guess I can do some Chakra exercises today, I can use more energy."

The lazy warrior said, before letting his legs drop as he collapsed on his rear. His hand rose, scratching the top of his hair before crossing his legs and fixing his posture, straightening his back and slightly puffing out his chest. To work your Chakra levels, it's best to start with a warm up. It's not every day Namakemono finds himself firing volleys of flaming orbs, in fact, he rarely uses Ninjutsu as an offense. Namakemono likes to focus on regular beatings and clever tactics with his own tools. Having not being use to Chakra fluctuation, he sat on the ground and brought both index and middle fingers together, his left hand above the right.

This was a simply hand seal usually used for Academy student to harness their chakra which usually takes a while for them to obtain. However, Namakemono is already adept with the system. Small strands of blue energy domed around the Chuunin, the grass waving with the fluctuation and leaves parting away, truly creating pure energy. This got Namakemono more in depth with his own Chakra system, he closed his eyes focusing on the balance. With the exercise complete, he simply parted his hands away from each other and let his body relax. This made the flow eventually depart and his system settled without rushing chakra outside his body.

The first part of the session was complete with his chakra controlling. This next activity was less....stationary. There were a few exercises Namakemono taught at the academy to help the academy students learn control, and one he mentioned was tree climbing. It sounds simple at first, but without hands, that gave another thought. This exercise however, Namakemono trained well with, so no hand signs needed. He slowly approached one of the many great trees scattered across Konoha where he would extend his chakra limit. Getting a light hum in the soles of his feet, he stepped towards the trunk. Raising his left foot first, he planted it on the face of the bark, where he felt a physical and spiritual connection with the wood.

He then continued his right foot and now he wasn't on earth anymore, but on the tree. It feels weird at first, but once you become more experienced with it, it's almost second nature. Starting the climb up the face of the tree, keeping control of the chakra in his feet, making sure not to use too much or too little. A slight spike in the amount would crush the tree and too light would make you lose connections and your grip would fail, ending up with you falling flat on your behind. With the success up the tree, Namakemono dropped from the top and landed agile on his feet. With one hand on the ground in a sorta pose, he stood straight up, and started his path to head home. 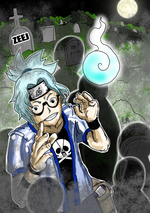